This episode, we focus on a serious issue.

It’s one you may have been wondering about, but not known what to do about – or even if it was a big deal at all:

Does tablet or smartphone use contribute to a child’s behavior problems?

We live in this world, which is absolutely filled with tech. The tech doesn’t appear to be going anywhere fast… So what’s the answer?

Does tablet use contribute to behavior problems?

Listen to today’s episode to find out!

For notes on this episode including:

– Three ways to safely use technology with your littles
– The sign-up for the 3 Secrets of Happy Parenting FREE online class, which distills everything I’ve learned into 3 simple lessons for true enjoyment of this parenting life
– Key Links and every back episode of We Turned Out Okay

And thank you so much for listening! END_OF_DOCUMENT_TOKEN_TO_BE_REPLACED

Today’s guest, returning champion KJ Dell’Antonia of the #AmWriting with Jess and KJ Podcast, brings her best ideas for how you can really enjoy this time of year, no matter what craziness you’ve got going on in your life.

Each year I bring you resources I know you’ll love as you figure out how to enjoy the holidays. This year I’m psyched because not only do I have audio resources for you, to listen while you drive on endless errands, bake endless cookies, or wrap endless gifts… I’ve got video and Facebook live offerings to help you handle the holidays as well!

– – A HUGE tree fell in our yard during a buck wild nor’easter last week, and we lost power for days! (Click here to check out the video I made of the tree!) All back now and everything is okay… But I had to delay the start of our epic “How to Help Your Child Navigate the Choppy Social Waters of Life Without Getting Pulled Under Yourself or Losing Your Mind” mastercourse.
The first live module now goes up on Tuesday, November 14, giving you until Monday, November 13 to enroll!
If you can’t make it to the modules live, you’ll always be able to catch them in our password-protected online classroom – plus ask questions over the whole 6 weeks of the mastercourse in our private Survive the Social Stuff Facebook group, exclusively for those enrolled in the course.…
To learn more and sign up go to weturnedoutokay.com/socialstuff! – –

Today’s conversation is one of those awesome ones that went in a completely different direction than I had thought it would.
I knew we were going to talk about racism, and parenting, and how New York Times best-selling author Joshilyn Jackson teaches creative writing to prisoners – but when, early on in our conversation, Joshilyn shared “I didn’t have any empathy until I became a mom,” my heart just stopped.

How could that possibly be, I wondered?

And so we raced off into a discussion that will help you understand empathy as a crucial parenting skill, perhaps the most important ninja tactic of all.

You are going to LOVE it.

Go to weturnedoutokay.com/194 for key links : )

END_OF_DOCUMENT_TOKEN_TO_BE_REPLACED

Each fall as the nights get longer and Halloween gets close, spooky feelings crop up. They can be fun, but for kids these feelings also be downright frightening.

Today I’m excited to bring you my conversation with my youngest, Jason, who remembers well the feeling of being afraid of the dark and shares really great advice for helping your kids cope with their fears.

We talk about all kinds of Halloweeny stuff, and also:
– Einstein’s view of the world
– Why validating a kid’s fears is the gateway to helping them feel less afraid
– Jay’s all-important question:
“How does pretending an avocado is alive show a mastery of empathy?”

… Just to give you an idea of the kind of conversations we have around here : )

Key links, including the one about Surviving the Social Stuff, the course that will help you feel less alone AND help your child navigate scary social waters, at weturnedoutokay.com/191! END_OF_DOCUMENT_TOKEN_TO_BE_REPLACED

It’s been a busy few weeks in the Ninja Parenting Community – I counted twenty different issues that parents in there are collectively dealing with – and I knew that, if they’re having these issues, most likely so are you!

Lots of them are bigger issues – but some of them can be resolved so easily. In today’s episode, I talk about one of the latter, and how simply by changing one phrase to a related, but different phrase makes disciplining our kids lots easier.

The reason has to do with child development, and the simple fact that kids aren’t just small adults; they have a completely different way of understanding the world from us. Once we know that, it makes everything else easier.

To find out more about today’s ninja tactic, listen to this short-and-sweet episode, or go to weturnedoutokay.com/159 for show notes and key links!

END_OF_DOCUMENT_TOKEN_TO_BE_REPLACED

At age 10, my youngest is coming closer to the end of his stuffed animal days. But you wouldn’t know it looking at his bed: 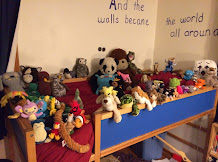 Each one of those guys has a name and a history, each has a unique voice – some of them have French accents! (Because, of course, they come from France or French-speaking Canada. Why else?)

Over the years they have helped my son through lots of tough situations, everything from being left out of big-boy activities to those times when no human is available to play. It’s funny to walk into the boy’s room and see a board game set up – like Risk – and three or four stuffed animals each in control of their own part of the board, each taking turns.

Right around the time that Putin invaded Ukraine in 2014, just after the Sochi Olympics, he my son happened to watch Red Dawn, the movie about the USSR invading the US. We do talk current events in our home, as well as history, but I think because we had just been so invested in the Olympics, this movie resonated a little bit more strongly with him than it might have otherwise. Still, we didn’t realize the true impact until late that night, when he asked if I would come and “speak to the animals – they are scared that Putin is going to invade the US.”

When I went to speak to them, I found them all set up in a circle up in my boy’s bed; they had been having a conversation among themselves about “their” concern that Putin was going to invade the US. I told them that Putin was not going to invade the US, answered “their” questions, and just tried to be a good listener, all the while knowing that it was really my son’s fears and questions that were coming through via the stuffed animals.

I’ve come to think of the stuffed animals like puppets, each making up a part of my son’s world and through which he can express fears and show empathy. Since he was small, this child has had an incredible ability to see events from another’s point of view, to see how someone else might feel differently than he does in a given situation. This is a rare quality, and definitely one to be supported – his sense of caring pervades all his friendships, and kids are really drawn to that. I believe it’s the stuffed animals that have helped give him this perspective.

As he grows out of them, and moves on to the things that tweens and teens do and love, I know he’ll take that empathy with him. END_OF_DOCUMENT_TOKEN_TO_BE_REPLACED

Subscribe to the We Turned Out Okay Podcast in your fave podcatcher:

I’m Karen Lock Kolp, M.Ed., child development expert and parent coach. (This is me, with my husband Ben and our sons.)

“I have two spirited kids and this is so helpful.” – Laurablou, 5-Star iTunes review